Why Is Google Not Afraid To Fail? 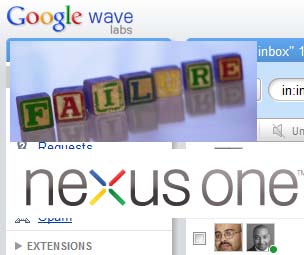 In the past couple weeks Google has shut down two of its latest failures. The first true Google phone the Nexus One and Google Wave.These failures are just a string of bad misses that Google has come up with in the past several years. See “10 Google Flubs, Flops, and Failures” That being said, why do you think Google keeps trying its hand at products and services with the best of intentions only to have them fail?

Heck, the first name the Google founders choose for their search engine failed. Imagine us all going around saying, Did you “Backrub” the name of Micheal Jackson to see how many tribute websites come up? or I bet you can find that street address on “Backrub” maps.

Well I say Google’s failures are our gain. For every Google failure there is at least 2-3 success stories. Case in point. In the last year how many times have you searched for something using Google search, sent and email using Gmail, or Watched a video on Youtube? How many of you are now making calls with your Android powered cell phone, listening to your voicemail using Google Voice while locating your favorite restaurant on Google maps.

We could go on and on about some of the awesome tools Google has created but the more I think about it the more I am convinced that the founders of Google are from the school of Thomas Edison and Abraham Lincoln. It took thousands of filaments to fail until one finally burned long enough to make the light bulb a success. It took Abraham Lincoln 15 years of many political defeats and failures to finally become our 16th president.

So, I say continue to fail Google. Continue to go out on a limb and try to prove us all wrong with yet another product or service destined for the scrap heap.  Every time you fail you make it easier for tech nerds like me to strive for that one shining moment of success.  You give people like me the will to stay the course and dream about one day turning our own “Backrub” into billions.

So, Solopreneurs. How many times have you failed?