Are You Google Buzzed OUT Yet?

Ok so the tech world is a Buzz.. no pun intended about this new communication service by Google. Google Buzz was release with very little fan fair and a lot of quirky bugs. No one really new what to expect from the announcement and many were puzzled at first with what they saw. Was this new service going to replace Google Wave? Or was it something that was going to challenge the social media behemoths of the world like Twitter and Facebook. Answer.. A little of both.

Google Buzz has made most of us wonder why it was not released instead of Google Wave oh so many months ago. By the way have any of you actually used your Google Wave accounts since being able to use the service? I used my account all of 3 times. It was way to advanced and complicated for me. I especially didn’t like the feature of having people see exactly what I was typing in real time.

Buzz is inside gmail which is a good and not so good thing.  Unlike Twitter, Facebook and even linkedIn you don’t have a Google buzz web address. You can get to someones buzz account through your Google profile address. Mine is http://www.google.com/profiles/jbrath

At first getting someones Buzz stream was a complete chore because of all the threaded replies and comments. They have since fixed that and most of the other privacy issue problems.

I for one am almost Buzzed out. The thrill is gone and I really don’t care to buzz anymore.  I currently have just over 56 followers who are really not that buzzed as well. I click on the buzz link in my gmail every once in a while but I am not really getting anything more than I am getting from the other social networking services.

So what’s your take on Buzz?

Are you tired of wasting paper and ink printing unwanted content and graphics from the Internet?  As wonderful as the Internet has

been all these many years for finding and distributing great content, there has been one huge flaw up till now that has not been addressed.

Most people that find what they want on the Internet eventually choose to print that information out via their laser or deskjet printer.  The problem is when you print that website out you almost never know what you are going to get.

“Print What You Like”  a Web 2.0 service has finally made it easy to fix an Internet problem most of us have endured for many years.

If you are like me all you really want is to print the content that is most important to you and nothing else. Well your frustration in printing websites is finally over because the printwhatyouwant.com service virtually eliminates the waste in three easy steps.

Lets say you are on a website that has content along with full color graphics for ads and a dark background. Depending on how that website was created, printing it could be a paper and ink nightmare.

Put that same url/website address in the space provided on Printwhatyoulike.com website and watch the magic happen. PrintWhatYoulike.com will take out all the background color, ads, and anything else you don’t want to print.

It is that simple.

Check out this video demonstration of just how easy it is to use Printwhatyoulike.com

This service has the best of both worlds, not only are you saving money by not wasting paper and ink but your savings stays in your pocket because this service is absolutely Free. Every time I use the service I feel as though I am making a difference in becoming more environmentally contentious. The more you use the service the more you realize how wasteful your old ways of printing websites really is.

Printwhatyoulike.com allows you to print Green while saving you some Greenbacks. I highly recommend you try this service and ask for some of your feedback on how you saved money in the comments below.

Ok the reviews are all in and the iPad has impressed us all when it was finally unveiled by Apple CEO Steve Jobs on January 27th. All 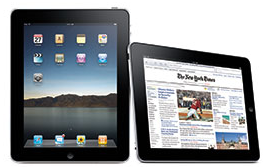 the hype finally came to an end when Mr. Jobs gave a run down of all the great features the iPad has to offer its users. I was just as impressed with many of the specs of this long awaited device.  I have read many reviews that were Good, Bad and even down right Ugly when it comes to the iPad, so here is my take on those reviews.

This review is the most comprehensive of the reviews I read. It is very detailed and well thought out. Ben does a great job of first giving an overview of the iPad by showing the introduction video that is also featured on the Apple website.  Ben goes on by breaking down all the specifications of the iPad. He then gives you the pricing, the availability, the closest competitors to the iPad and then finally what the iPad lacks.

This review gives you a breakdown of all the things that are not so good about the iPad. I like this review because it uses pictures to tell the story of why you may want to think twice before you run out and pre order the iPad. It starts with the fact that Apple chose to name their new device iPad instead of one of the rumored names like  iTablet or iSlate. This review then goes on to criticize all of the many things wrong with the iPad that include the lack of mutitasking, a camera, flash capability and a USB port just to name of few. I thought this review was very creative in bringing more attention to the weaknesses of the iPad.

The iUgly
iPad reviewd by Michael Arrington of TechCrunch.
iPad v. A Rock

This was the funniest review and the most harsh, hence “The iUgly” term used.  Michael goes so far as to compare the iPad to an actual Rock.  Even though this review makes fun of all the things the iPad does not do, it gives  you a cut and dry understanding of why we should not have played into all the hype.  And get this, the  rock almost wins in this side by side comparison.

When first hearing about and then seeing all the cool stuff the iPad could do I was convinced this device would be the first Apple product I would choose to own. Unfortunately after then hearing about all the things the iPad could not do, I am going to give it a PASS for the wish list this Christmas. Their were a couple of deal breakers but the ones that sealed it were the lack of USB and SD ports on the device without an adapter or docking station, the lack of multitasking and the lack of compatibility with the T-mobile 3G network. I just signed up for T-mobile and even though the iPad is sold unlocked it will not connect to my cell phone carrier. I guess I will have to wait for the iPad II or see what the HP Slate has to offer when it debuts some time this year.

Will you, get an Apple iPad?

If so please let us know why.