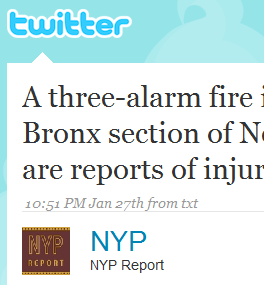 I have to give credit where credit is due but this post is a little more personal when it comes to the subject matter. You see I got a call from my sister at about 1 am on January 28, 2009, she was crying and screaming so loud I could hardly understand what she was trying to say to me. At first I thought the worst and feared someone had died or was injured severly.  I then told her to calm down and to please tell me what was wrong.  All she could say at first was that mom is okay.  After reasuring me that our mother was ok she then told me the devistating news that our childhood home in the Bronx went up in flames that night.

After speaking to my mom who reassured me that she was ok and on her way to the hospital, I then took to the Internet to find out any information on how this unfortunate incident could have happened.

I first tried to get the news from several websites of the local television station in New York. I then tried to get a local New York news radio station. Both proved to be very confusing and had no news about what happened to my mother”s house.

I then did a Twitter search on “Bronx Fire” and came up with the below results. All of which gave me more information on what happened to my mother’s house.

These search results not only gave me what I needed in more information but they also gave me up to date video coverage of what happened with the fire. 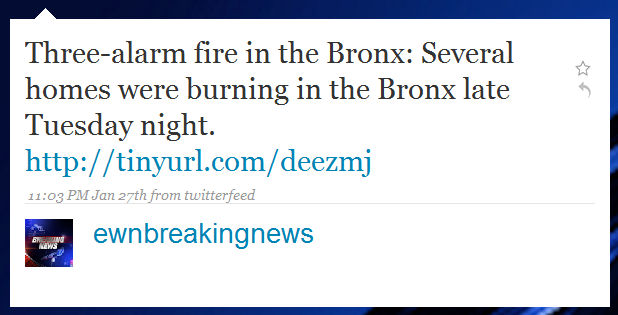 NYP and they were able to give me more detailed information on the damage of the fire.

As much as I am sad that my childhood home has gone up in flames, I am truely thankful and blessed that my mom was not seriously insured. I am also thankful to those who used Twitter that night and gave me the updates I needed to fill in all the blanks I was getting from traditional media.

The power of Twitter has become very real to me these past couple of days since the fire. I am now using Twitter to find out more on fire insurance and how to deal with public adjusters.

I will keep you all posted on my findings. Stay strong in this economy Solopreneurs.

Change has come to WhiteHouse.gov 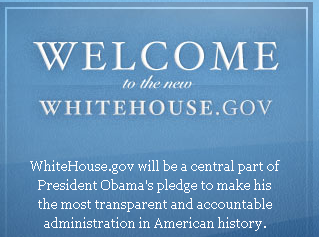 Not to long after our new President of the United States was sworn in change instantly happened to the White House website.

The new Whitehouse.gov website is run by Macon Phillips, the Director of New Media for the White House.

According to TwitterCounter the Whitehouse twitter account added 4,764 followers yesterday and predicts another 7k the next day, with 76k by the end of 3o days.

There is no sign of an official Facebook page for the White House yet but if one does crop up I will keep you posted.
If you see one before me please shoot me an email or send it in a comment on this post.

My favorite part of the website currently is the THE BRIEFING ROOM. President Barack Obama plans to publish a weekly video address every Saturday morning of his presidency and you can find it under this heading. The Briefing Room also has a section for the official White House Blog. I look forward to seeing and reading the many post but I don’t yet see a way one can make comments to the blog.

President Obama did a masterful job using the Internet leading up to his eventful election and will continue to use social media as a way to stay in touch with the many Americans that helped put him into office.  President Obama gave us many lessons on how we as Solopreneurs and Small Business people can use social media to help promote and market out businesses. Please see my blog post Barack 2.0 Will Help Solopreneurs Understand Social Media Marketing to learn more.

I, for one look forward to the change our country is headed toward and I am so proud to not just be an African American  like our new President but finally proud to be an American.

and May God Bless our New First Family

Happy New Year. I have to apologize first to my many readers for taking so long to post for the new year. I have been trying to determine what I am going to focus on both professionally and personally for 2009 and could not get my act together until now. This post will be short and sweet because I just want to pay homage to just one Web 2.0 application that has really made an impact on me and many millions of others.

Twitter, oh and by the way my Twitter address is @jbrath. If you don’t have a Twitter account yet get one NOW. It is free and will bring you into a whole new world of social media interaction. I got so wrapped up in Twitter I grabbed the domain name Twarketing.com to study the many companies using Twitter as a marketing tool.

There are many books on Twitter but I am personally waiting for the release of Joel Comm’s book Twitter Power to come out next month.

If you are new to Twitter, one of the best blogs to get up to speed is Twitip.com TwiTip is edited by Darren Rowse from ProBlogger

There are even more Twitter application to support your using Twitter. Some of my favorites are Tweetdeck.com, SocialToo.com and Twittercounter.com

You can also use Twitter’s search engine when  you want to do research on something and get real time responses.

So I would have to again say that Twitter made the largest impression on me in 2008 and I am looking forward to what they have in store for 2009.

Have a blessed and prosperous 2009 and please tell me your experience with Twitter Good or Bad.