How I Survived Amtrak Train Travel 1.0 And Lived To Tell About It

I recently had the displeasure of having to travel to New York City from Atlanta, Georgia, by Amtrak train.  I took the train to New York because it was the most economical way to book a trip at the last moment and I wasn’t required to be at my destination the same day. The trip takes about 18 hours one way. I have not taken a train to New York from Atlanta in about 10+ years. Things were bad then, but I was certain there would be vast improvements now due to fierce competition with plane travel.  Well, turns out… NOT!!!!

At first I was very impressed with the way I could book my ticket online via Amtrak’s website.  But I could not print out my own boarding pass and had to pick up a paper ticket from the ticket booth upon arrival at the train station.

OK, let’s talk train station. Atlanta surely has the smallest train station for a city of just over 5 million people.  The station is so starved of passenger traffic that the lone Red Cap baggage handler was trying to make extra money selling tickets to events taking place at the Masonic Lodge next door. The only true parking area in the building’s vicinity is across the street at the Barnes and Noble Bookstore. All kidding aside, the Amtrak train station in Atlanta is in need of a complete renovation.

OK, let’s talk security. I got there a little early and decided to check one of my bags. I then noticed that I was one of the few to check my bag because all the other passengers took their bags with them on the train. To my amazement I then took notice that even though we are living in a post-September 11 society, none of our bags were put through any kind of visible x-ray machine to check for illegal contraband. There was also no one there to check our tickets to make sure we were permitted to go down to the train platform. Many of the passengers’ friends and family members followed us down the stairs to the awaiting train. I wasn’t asked to by anyone to show my ticket until after I’d boarded the train, sitting in my first come, first served seat.

OK, let’s talk comfort and convenience. Nothing has really changed in the 10+ years I last rode the train. Mind you, I rode in coach class, so I was really not expecting anything. The biggest change that I noticed was the adjustable 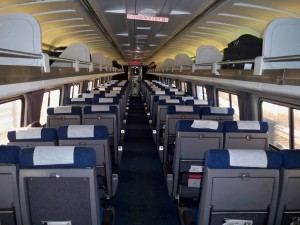 footrest that made a loud cranking noise every time you moved it.  One would think that Amtrak would have taken a lesson from plane travel’s SkyTV and equipped their train cars with televisions to play movies or maybe even taped TV shows. Heck, I was on a chartered bus trip to Washington, DC, some years ago and even that bus had TVs throughout the cabin for our entertainment on such a long trip.

OK, let’s talk about amenities. Amtrak had boasted on their website that they have T-Mobile Wifi Hotspots at most of their train stations (Atlanta not being one of those stations), but of course they never got around to putting it on their trains. Wifi on trains should have been a no-brainer for Amtrak since most trips usually take hours to get to one’s destination. Wifi on trains has taken off in Europe and it is growing by leaps and bounds on commuter trains like San Fransisco’s BART here in the USA.

Not only could Wifi be another revenue stream for Amtrak, but it would serve as a marketing perk and could be used as a key tool to help compete with the airlines. Soloprenuers with a penchant for train travel would jump at the chance to pay for the ability to get their work done while on such a long business trip. Amtrak would have to act fast on this endeavor because Delta Airlines is looking to have Wifi on almost all their planes by the end of this summer.

OK, let’s talk food. Thank goodness I had the presence of mind to take along food to eat on my journey up to New York. 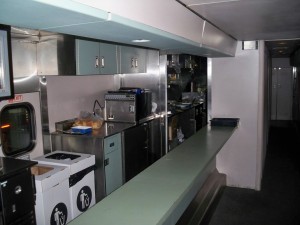 Regrettably, I was not so fortunate on my trip back to Atlanta from New York City to pack enough food to last me the whole 17+ hours. Not only are the food items expensive but they are in limited supply–tending to run out before the trip is over.  When the last of my rations were gone, I tried to hunt and gather in the dining car first. No luck–they refused to sell me a cheeseburger meal because it was not on the dinner menu. I was then left with no choice but to eat from the snack car and made the mistake trying some microwaveable hot wings. I got so sick I had things coming out of both ends, if you know what I mean. My body will never–and I mean never–be the same.

OK, let’s talk Amtrak staff members. Finding my seat was fairly easy but keeping it was like passing an act of Congress. The Amtrak train conductors had a REALLY hard time keeping track of which person was in what seat. They constantly asked us where we were sitting and made many of us move unnecessarily when they could not figure it out. At one point, I was awakened around 2 a.m. and asked to move because a husband and wife wanted to sit together.

Heading back to Atlanta there was a 2-3 hour delay in Virginia, but no announcement as to why they had to stop the train.  Asking the staff was a joke because they were just as clueless and could only guess when we would be on our way again.

OK, let’s talk about the pictures and the people. Despite my preceding objections, the trip was really not all bad. I did enjoy the view of the picturesque American landscape rolling by my window. There is nothing like seeing the countryside from a train. The 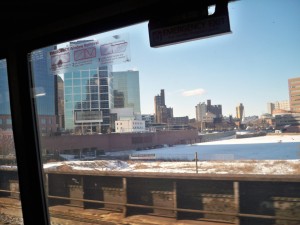 speed of the train allows you just enough of a glimpse to take in and imagine the quaintness of a small town.  I also enjoyed my fellow passengers.  I met some very interesting people both going and coming. Train travelers have a way of kicking back, relaxing and letting their hair down. This was true “social networking” at its best–without a computer or a smart phone.  Think about the train scene in the movie Trading Places–but without the gun or the gorilla. One older lady shared with me that she preferred to ride the rail because she has never been in a hurry to get anywhere that a plane could not satisfy her needs.

Amtrak really needs to take lessons from our neighbors across the pond in the United Kindom and France, as well as in Japan.  They definitely know how to take train travel to the next level. Yes, I survived my Amtrak train travel 1.0 experience, but I look forward to the day when trains here in the U.S. can give us a cheaper, faster and greener transportation choice in our 2.0 world.